If there is one food that likes to divide people all over the world into two groups, it is the oyster. And even though I don’t know why, I know why and why. I love oysters and – as the tales of Casanova tell it – would enjoy 50 oysters for breakfast every morning. Unfortunately, that is rarely the case. But from the beginning.

Oysters. They are these salty tasting shells with a strange consistency that are often offered for a lot of money per piece in upscale restaurants or delicatessen shops. 3,50€ per piece? 4.90€? 6€ per oyster? The range is wide, but not only in terms of price. There are also big differences in size and taste between this luxury, iodine-rich snack of the rich and beautiful.

Before the little treasures end up at the table with brown bread and vinaigrette, a lot happens. It starts with the origin of the oyster. There are European and Pacific oysters, both of which are traded on the European market today. The European oyster – who would have guessed – comes from Europe, whereas the Pacific oyster, also known as the rock oyster, found its way into European waters via Asia. Pacific rock oysters from France, Ireland, the Netherlands and also Germany are particularly well-known and popular. In this country, people love the Sylt rock oyster, which grows and thrives in the oyster beds off the North Frisian island of Sylt.

A widespread misconception, often not necessarily propagated by oyster lovers, is that oysters always taste the same. Salty and like the sea. Even if that were the case, I would eat them with great pleasure, closing my eyes and thinking of my last day at the sea. Similar to wine, the taste of oysters changes depending on the species and origin. Do we also speak of terroir with oysters? In any case, the oyster’s taste reflects its origin and tastes particularly fine, mild, salty, sweet or intense depending on the water it “consumes”.

When an oyster is fully grown after 1 to 4 years, which depends on the water and the water temperature, it is refined. After harvesting, the oysters are kept in special water basins called “claires” – naturally alive. These claires are fed with water that is particularly rich in nutrients and minerals and thus refine the taste of the oyster. The same applies here as with champagne: the more time the oysters are given in the claires, the higher the quality and more complex the taste.

Anyone who has ever found oysters on a menu will have read terms like “Fines de Claires” or “Speciales” behind them. These terms give information about the time they have spent in the claires.

“Fines de Claire” – it has been kept in the clarifier for at least a month and tastes pure and salty.

“Spéciales de Claire” – it stays in the water of the claires for at least two months. In taste, the oyster becomes even more refined and elegant.

“Pousse en Claire” – quasi the Grand Cru. It spends up to a maximum of eight months in the claire and presents an incomparably fine and delicate taste.

My favourite among the oysters. Unfortunately, the Belon is usually the most expensive oyster on the menu, but for me it is worth the extra charge. Unlike the “commercial” oyster, it is not oval but round and is characterised by a particularly nutty aroma with fine, firm flesh. The name “Belon” comes from its origin, the river in the south of Brittany.

It is one of the best-known names in the world of oysters. It is not an oyster of its own, but simply named after its producer in Marennes-Ile d’Oléron in Brittany. It is particularly full-fleshed and balanced in taste and can be recognised by a “G” lasered on the underside of each individual oyster.

As a big fan of Sylt, this is an absolute must. On Sylt, the oyster beds are located off the coast in northern List. Not only do you enjoy a completely local product from the local oyster beds in the Wadden Sea – the rock oyster is also special in taste: thanks to the cold habitat and the accompanying long growth period, it tastes tender, less salty and often a little sweet.

Important: Never slurp the oyster and swallow it immediately. Chewing is the order of the day. Only then does it unfold its full aroma!

The possibilities for enjoying oysters are almost endless, although I personally swear by the pure, unadulterated oyster pleasure. No special garnishes, a squeeze of lemon if necessary, and off you go.

If it needs a little more flavour, I add a small spoonful of the vinaigrette or a dash of Tabasco. Light soy or Worcester sauce is also worth a try.
For me, too much and often a shame for the original product are the different preparation methods over the fire. Whether au gratin, deep-fried or grilled. These preparation methods are often accompanied by heavy sauces and usually completely cover the taste of the oyster.

Drinks to enjoy with Oysters

Of course, the right accompaniment to the oyster in a glass should not be missing. The simplest and most classic would be a light Muscadet, which enhances the flavour of the oyster wonderfully. A classic, crisp Chablis is also always a working partner for a dozen oysters. Also never out of place is a Blanc de Blanc Champagne, Sauvignon Blanc or Fino Sherry.

If you like it fancy, you should try a Sauternes – that is, sweet wine from Bordeaux – with your oyster. A feast! 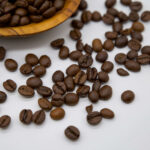